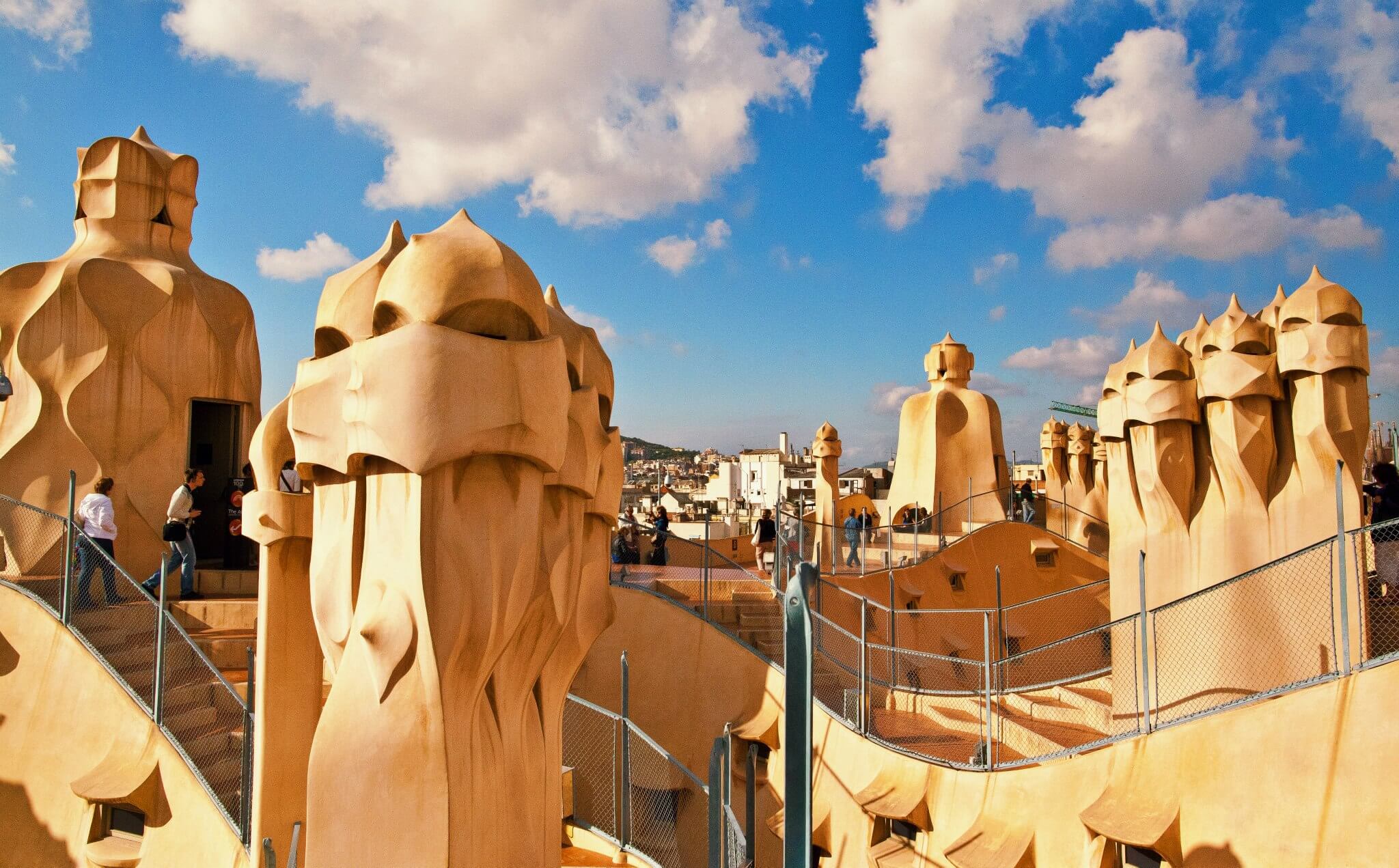 In Barcelona we woke up very early to catch sunrise, strolled around town, and found ourselves get lost in its richness of history, architecture, and romance. We wandered and roamed the town until our feet were exhausted. We love Barcelona, capital of Catalonia, for its nobility, intensity, and charisma.

As quoted by Lucio Marineo,” Barcelona was a most illustrious city for its princes and most noble , its knights ; its richness and great prosperities where known all over the world for being marvelous and vigorous , and therefore, exposed to envy…” 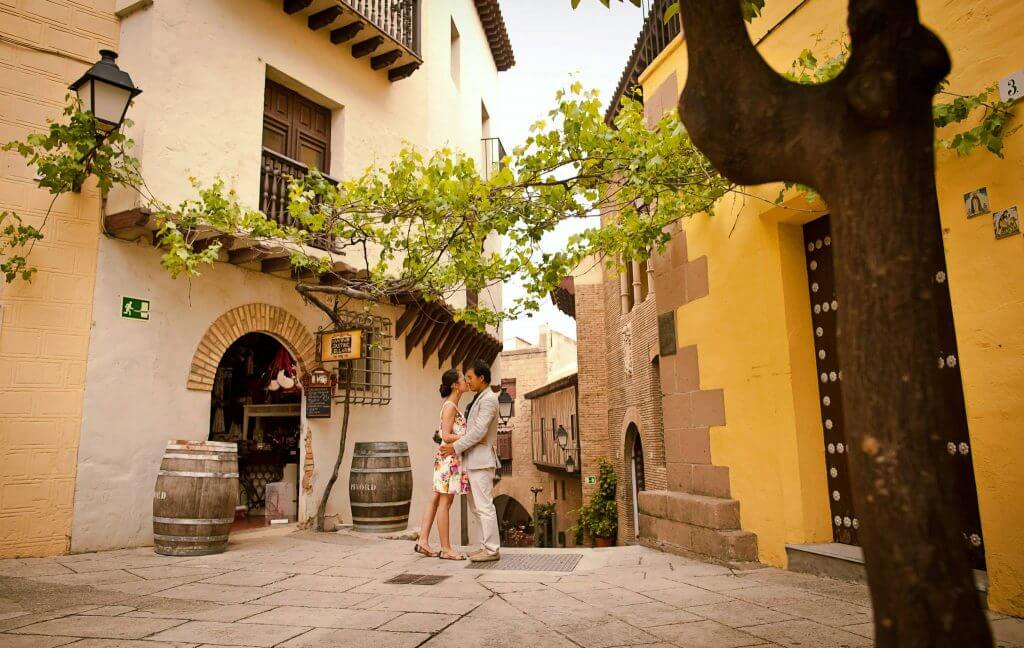 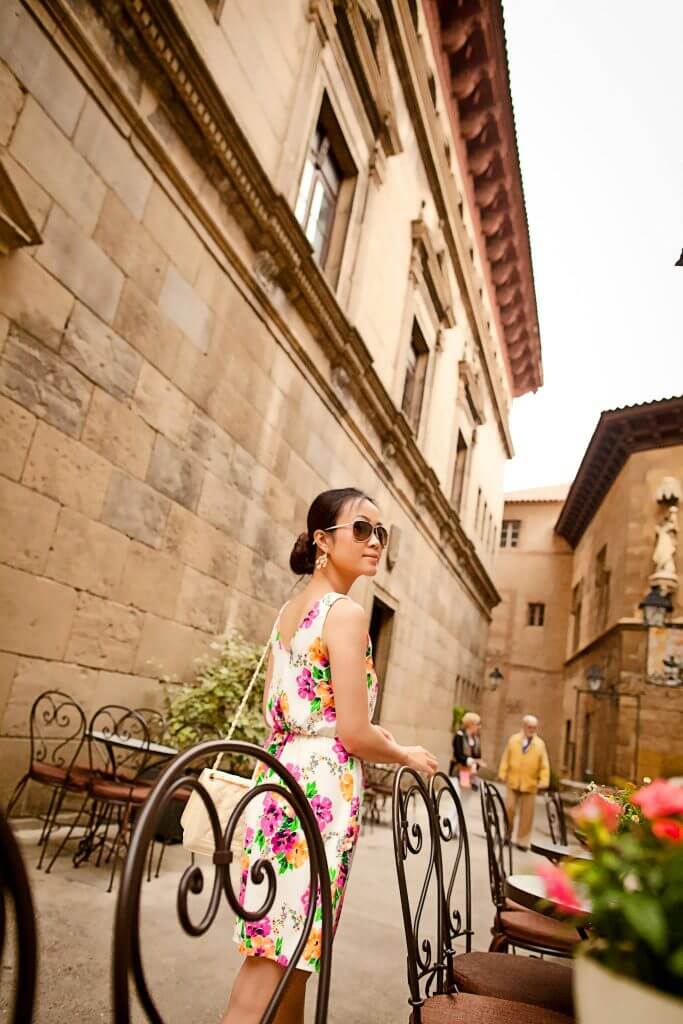 One of our favorite attractions in Barcelona is Casa Milà, commonly known as La Pedrera. It is the largest civil building designed by Antoni Gaudí. It was Gaudí’s last work before devoting himself to the construction of the Sagrada Família. 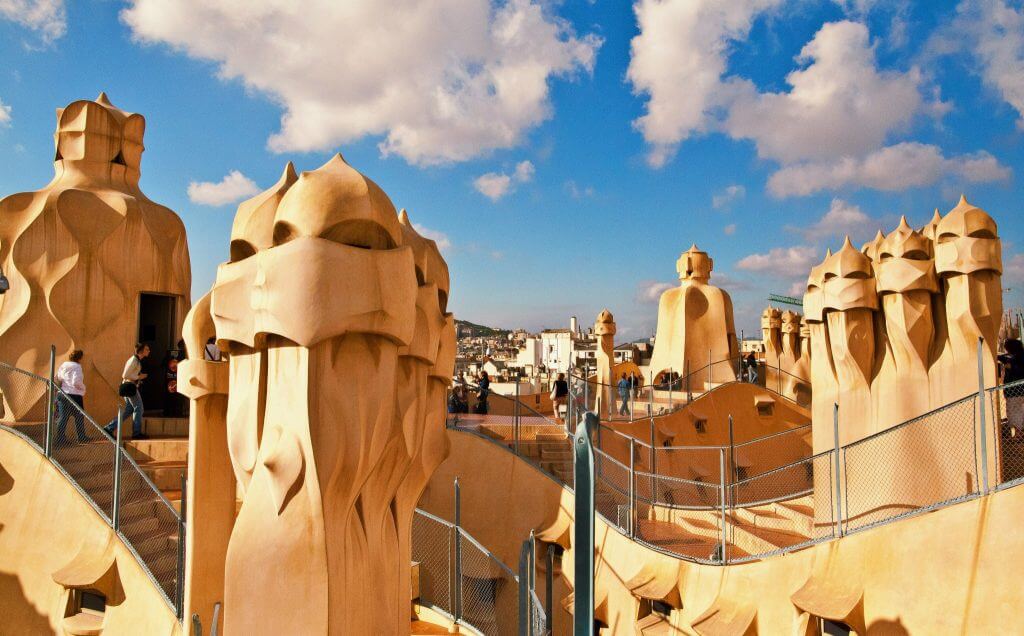 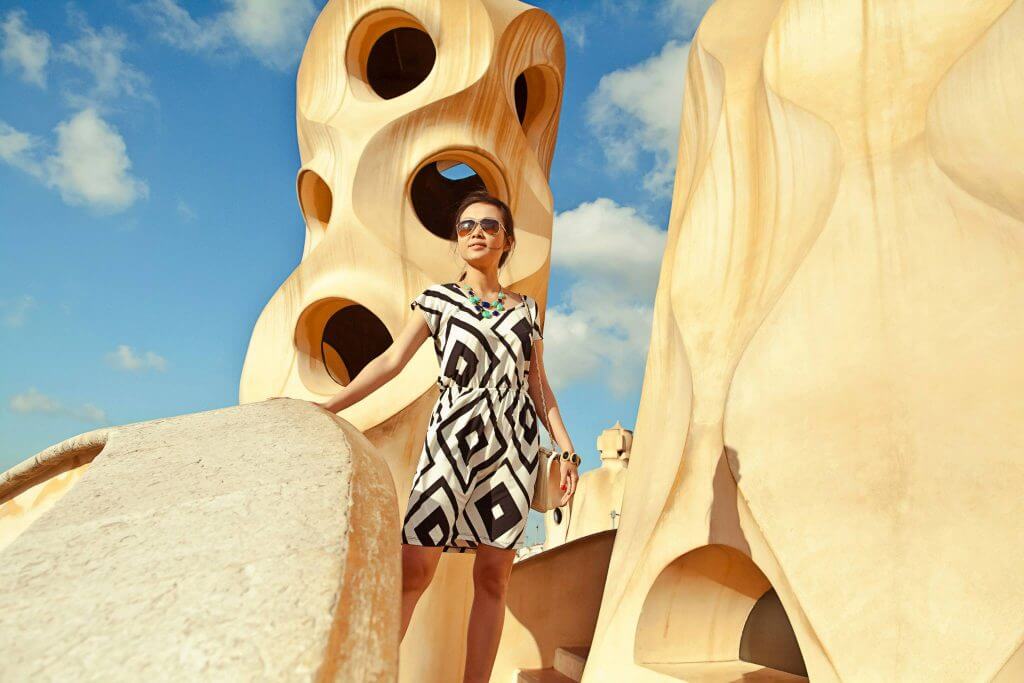 The roof is probably the most intriguing part of the building. It features a number of surrealistic colorful chimneys. Many of them look like warriors in a science fiction movie.

Gaudi’s architecture and designs were the result of attentive and intelligent observation of nature forms and structure. Some of his designs mimic animal and vegetable form like python skeleton, palm tree bark ring, or even corn. 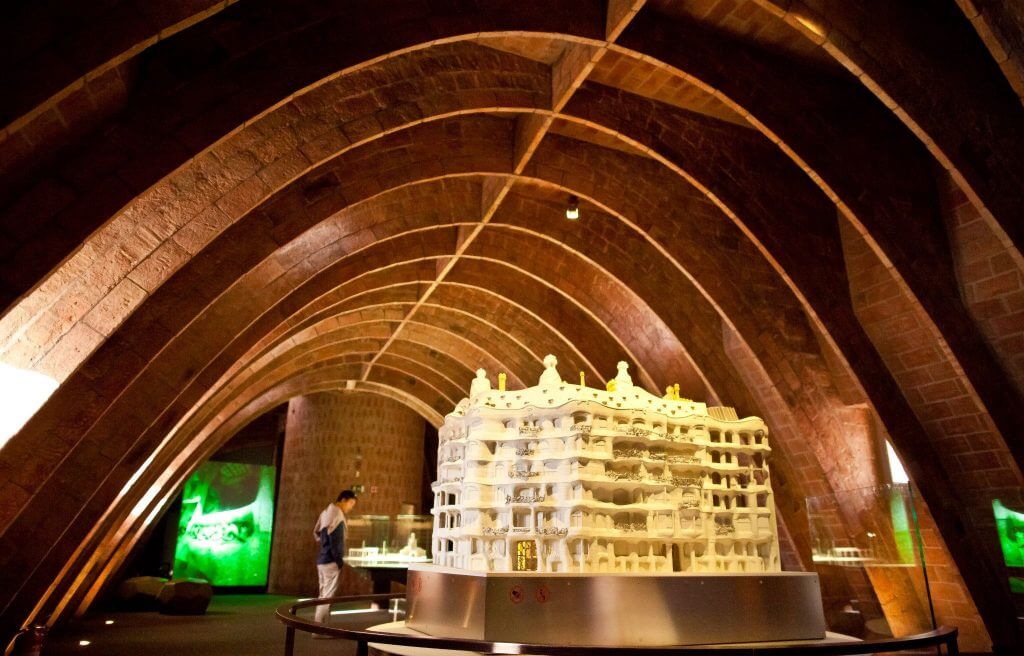 The colorful Casa Batlló is one of Gaudí’s many masterpieces in Barcelona. It has a unique, extraordinary, and fairytale-like exterior. 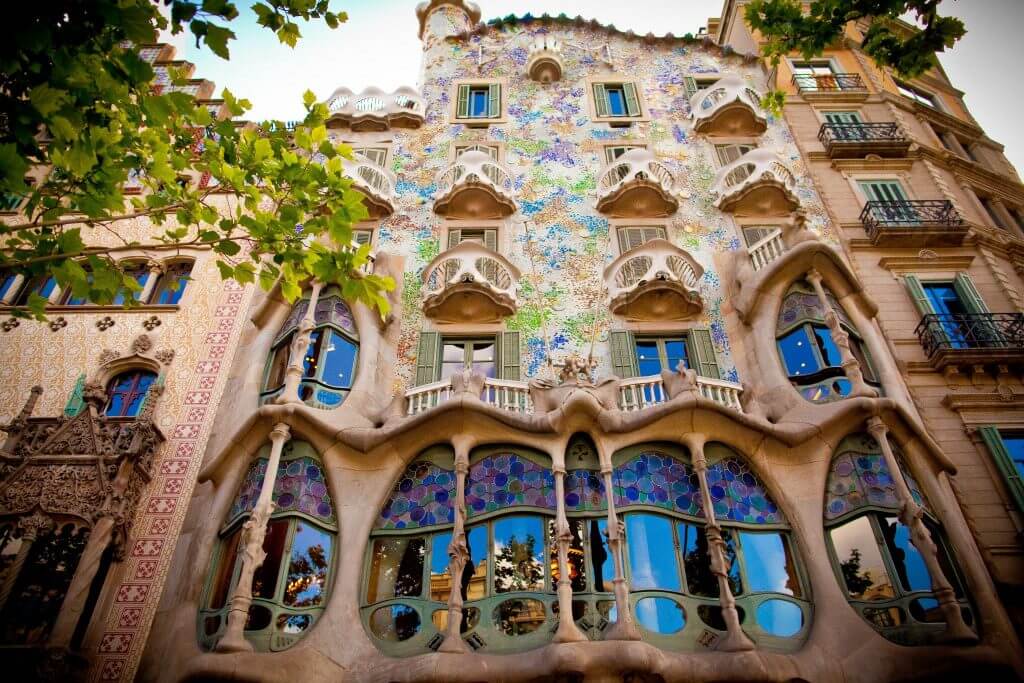 Gaudi was a pioneer in green designs since his works shared many links with the principles of sustainability. For example, he used scraps of ceramics to integrate into his designs. 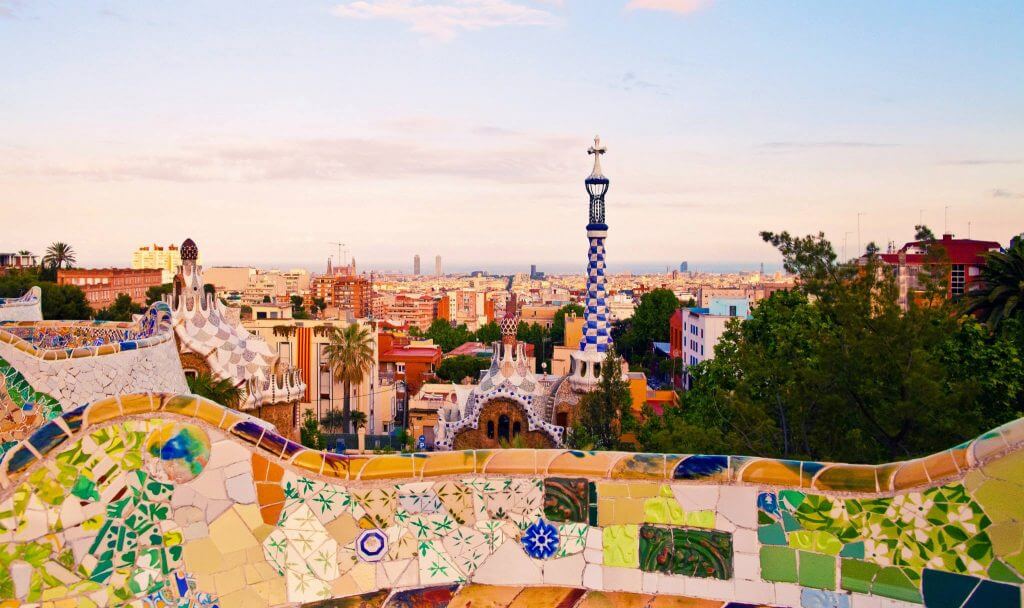 Gran Placa Circular is bordered by what was known as the world’s longest bench. The colorful ceramic serpentine bench twists snakelike around the plaza. The view from the plaza is spectacular, we can see as far as the Mediterranean Sea. 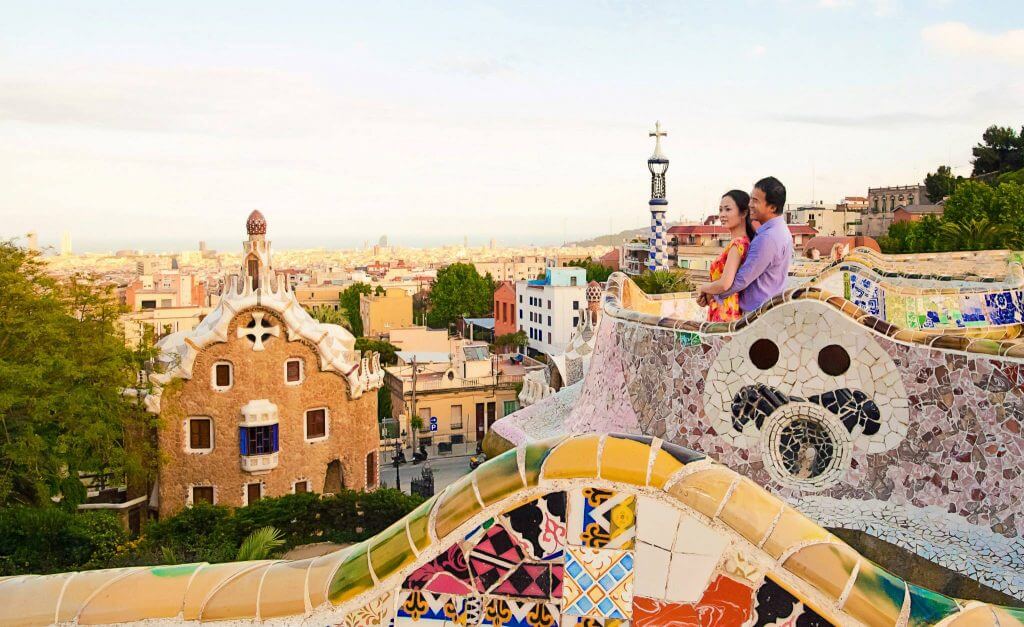 Parc Güell is one of the world’s most intriguing parks. The park’s colorful main staircase and the fanciful pavilions that were designed by Antoni Gaudí look like they belong in some fairy tale.

The pavilions with curved roofs are covered with brightly colored tiles and ornamented spires. The staircase at the entrance of the park is also designed by Gaudí. The dragon-like lizard at the center of the decorated staircase is the best known symbol of the park. 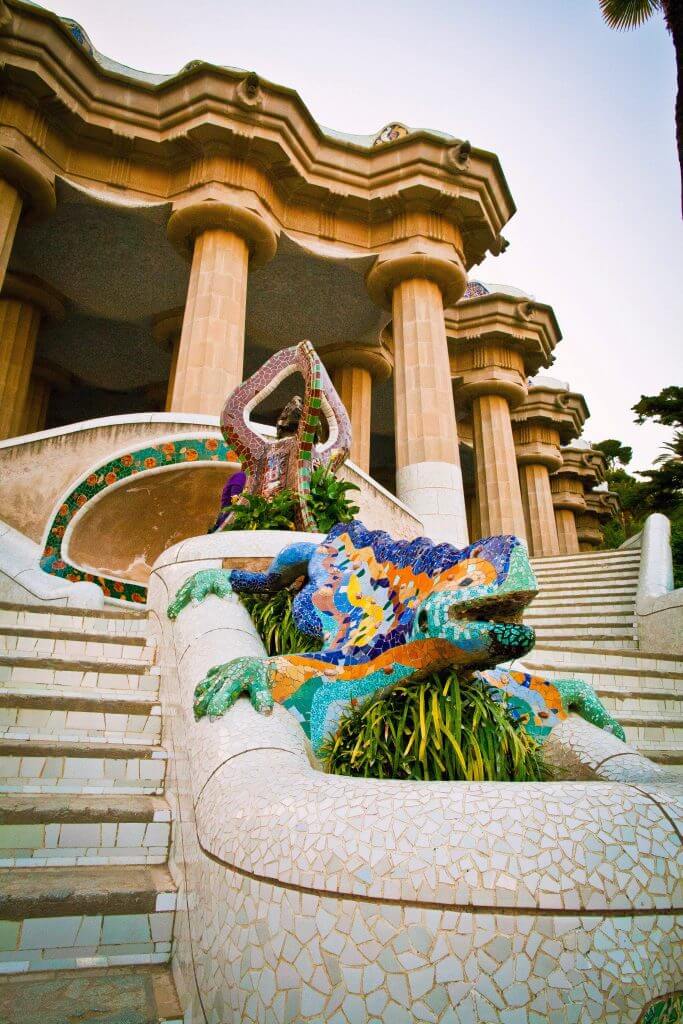 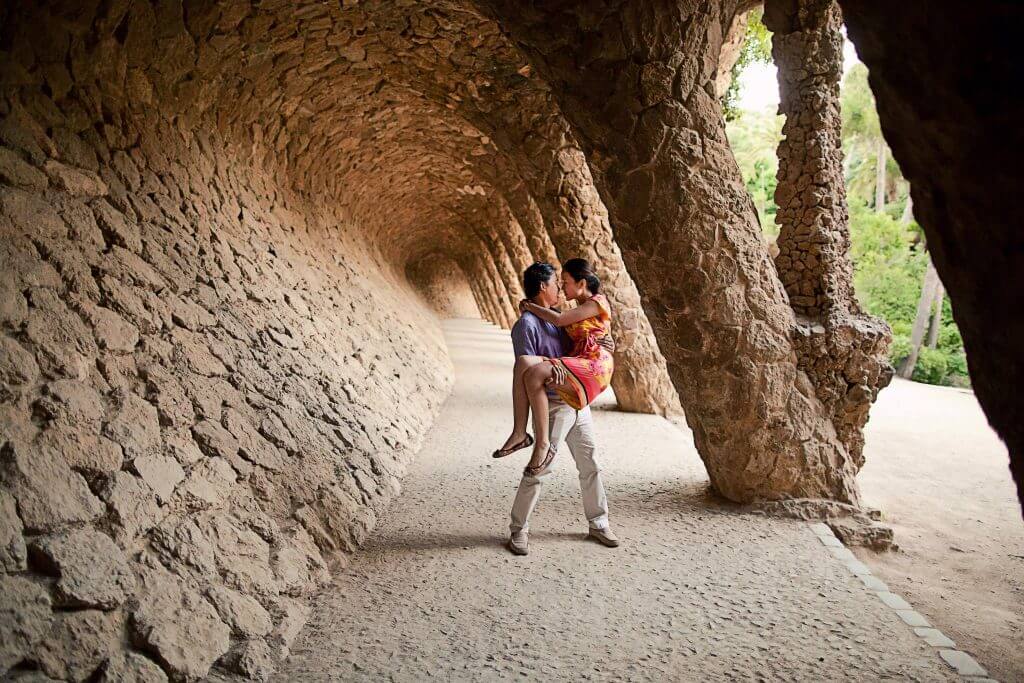 In the center of Gothic Quarter, the heart of Barcelona, is the city’s Gothic cathedral, known as La Seu. The cathedral is famous for its 14th century cloister, with a central courtyard surrounded by a marvellous Gothic portico. There are always 13 geese in the courtyard. Each goose represents one year in the life of the martyr Santa Eulalia, a young girl alledgedly tortured to death in the 4th century by the Romans for her religion. 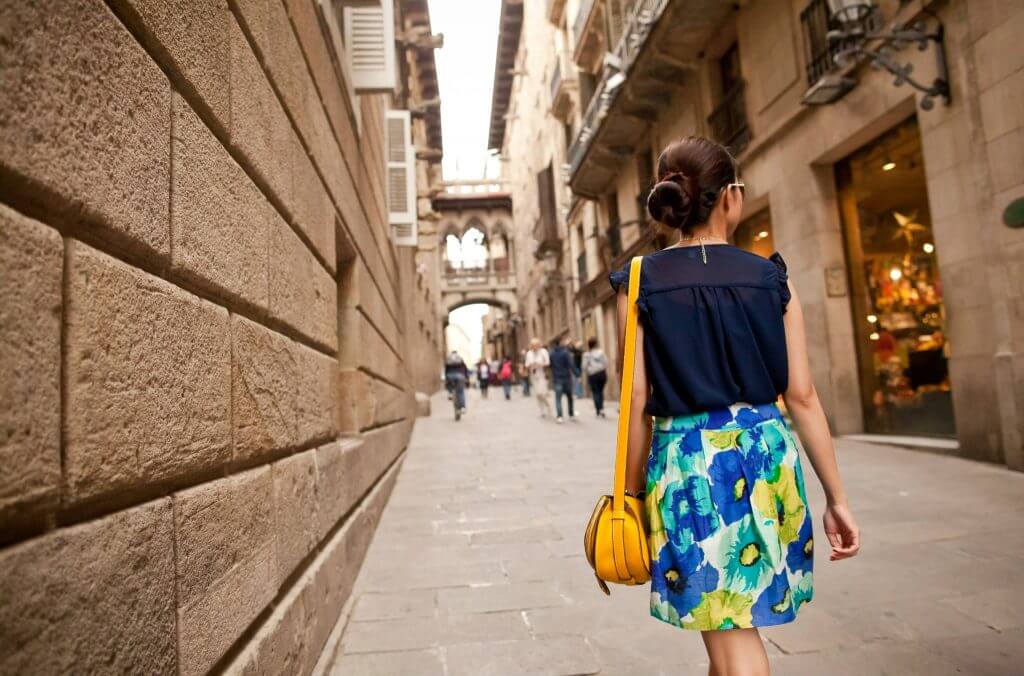 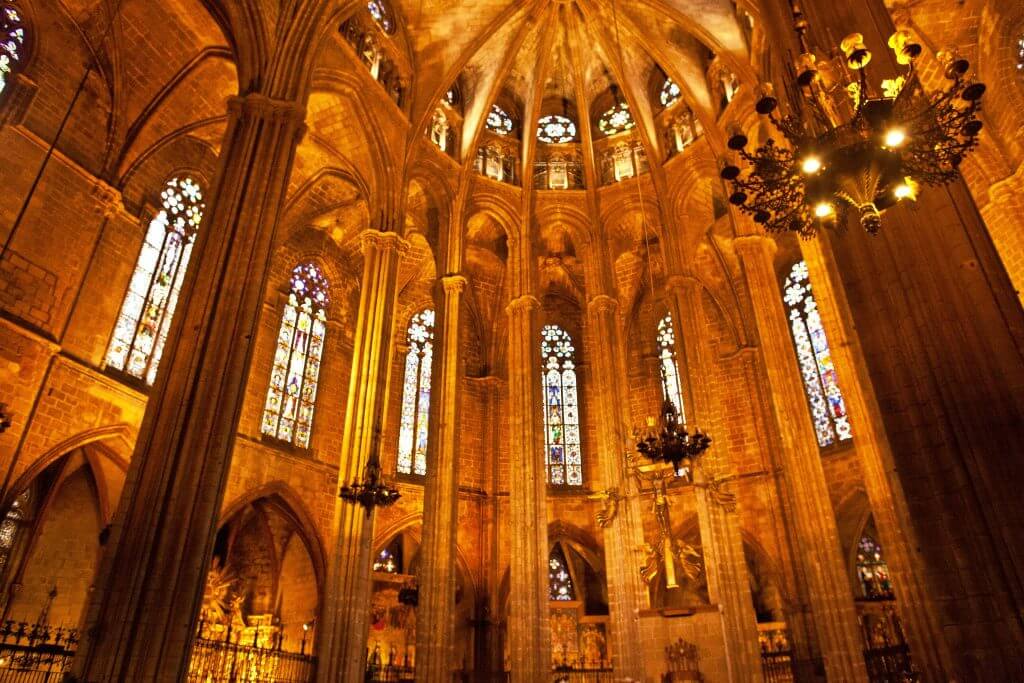 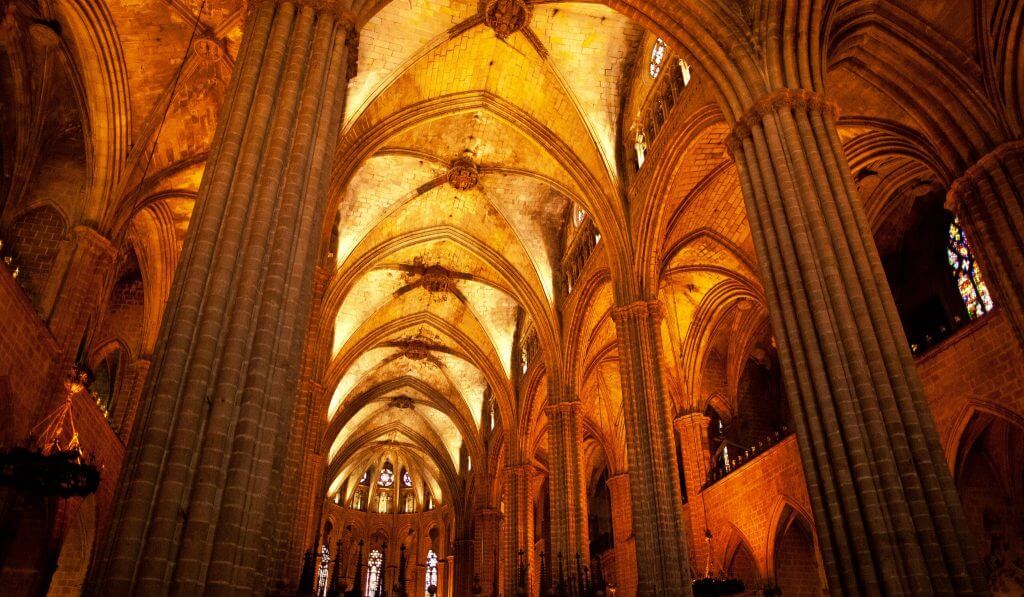 The Mercat de La Boqueria (Boqueria Market) is the most popular of the many food markets in Barcelona. The market hall is one of the most lively in all of Spain, with over 200 stalls selling any kind of fresh food from fish and meat to vegetables and fruit. 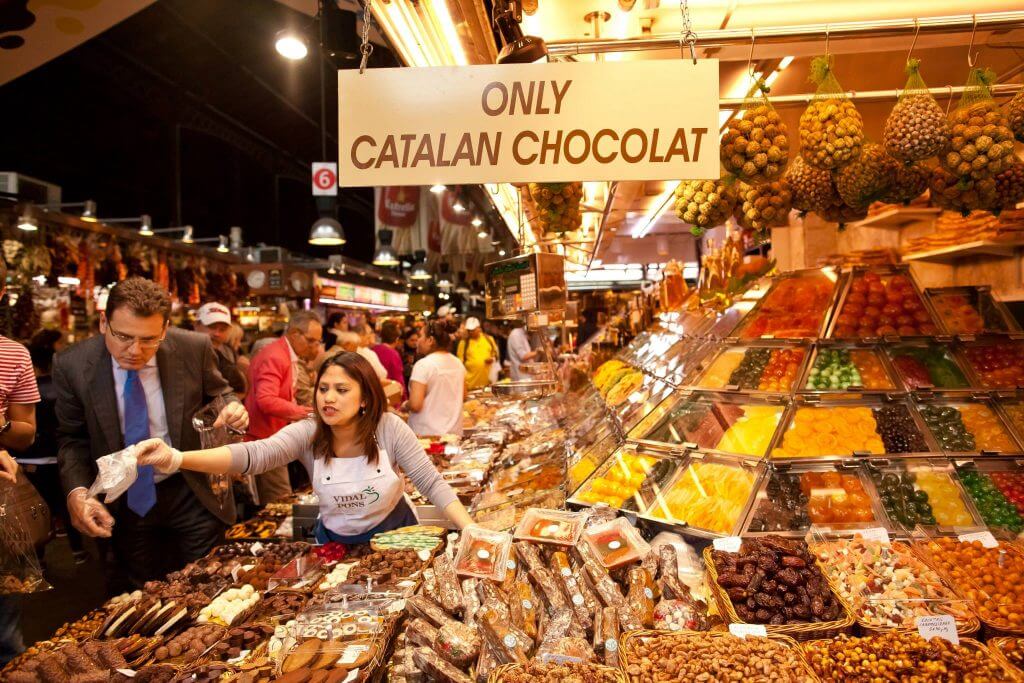 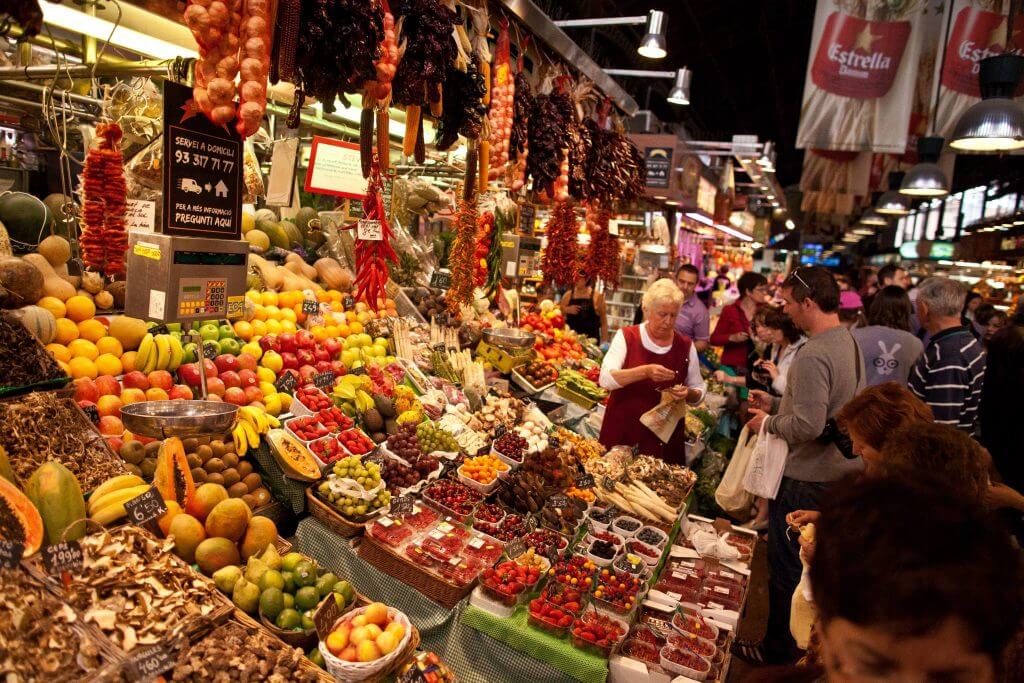 But our most favorite thing in Barcelona is the cake for the Cenetary of La Pedrera. This is how much my husband and I like this cake. The first time we ordered only one cake to share since we are not fond of sweet cakes. After we took our first bite, we discovered this heavenly-tasted, not-too-sweet, rich-white-chocolate cake can’t be shared. The second time we went back, we had decided we would order 2; but we arrived at the cafe at 11pm and this place was closed at 10pm. Third time was the charm; we arrived on time, and each had his/her own cake. Believe me, this cake is that good!!!! 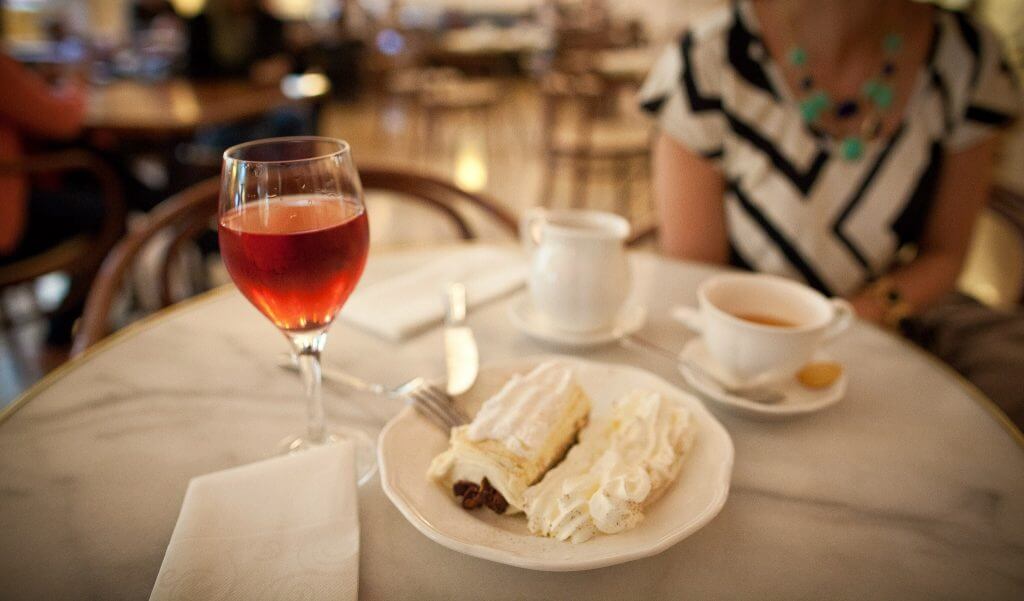 …and we were super happy after having this delicious cake on our last night in Barcelona! 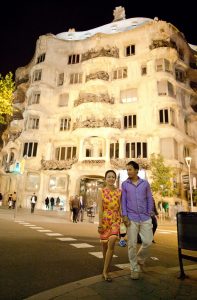 Thanks everyone for reading!