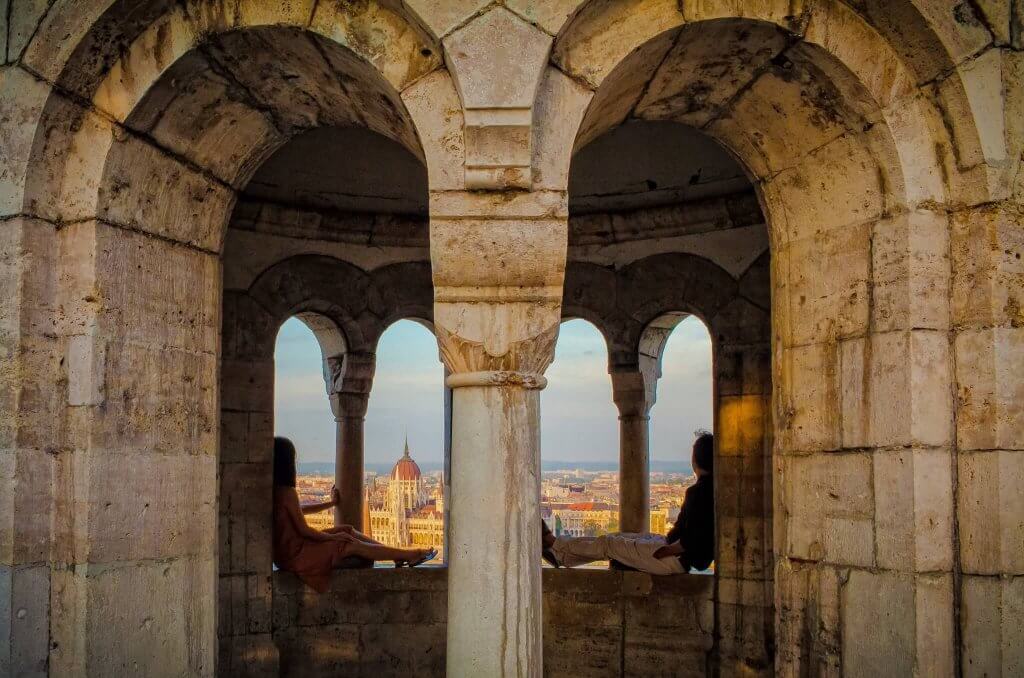 Dear my readers, if you are planning a trip to Budapest, I believe that you already did your due diligence in researching about Budapest: hotels, restaurants, attractions,…and nowadays with Tripadvisor and Lonely Planet you can plan the entire trip to the most trivial details just sitting in front of your computer. You know which popular attraction site to visit, which local dish to eat, and even which train to take. So in this blog post about Budapest, I would like to share with you a different aspect of travel-Photography. Here’s my list of top 7 favorite spots in Budapest to take beautiful travel-brochure-quality pictures.

1.The Chain Bridge at Night Time:

The Chain Bridge is one of Budapest’s most well-known landmarks. It crosses the Danube River and connects the Buda and Pest sides of the city. It’s beautiful any time of a day; however for picture purpose, I have to say the Chain Bridge is the most magical at night time when the bridge, the Parliament Building, and the Buda Castle are all illuminated. One of our causing-lots-of-wonder shots is this following picture: 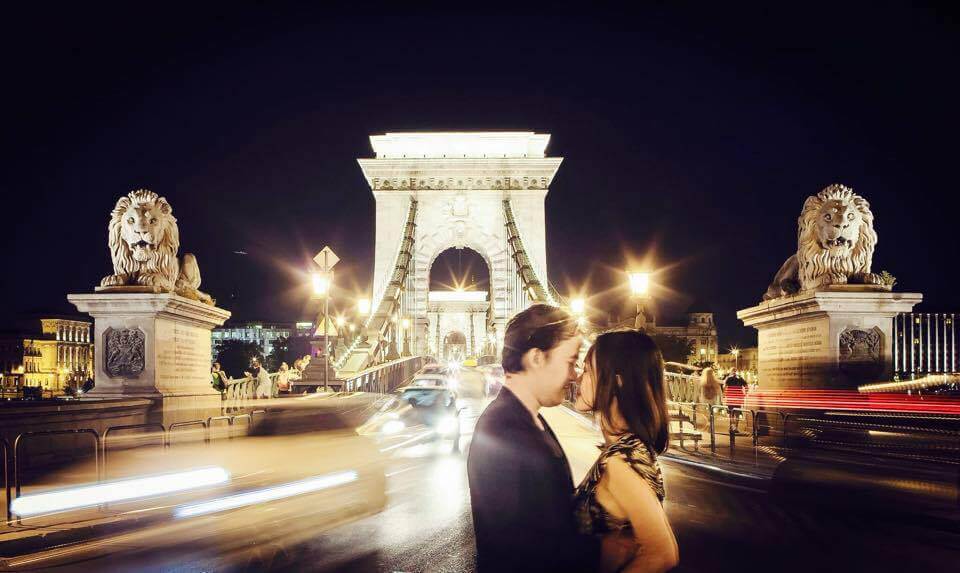 And no,…we didn’t stand in the middle of the street and risked our lives for a picture. We were actually standing within a pedestrian crosswalk. So here’s the secret: at the two ends of the bridge where two incredible stone lions sit are 2 pedestrian crosswalks; each has a little “island” for pedestrians to stop in the middle of the crosswalk in case the traffic light turns green and pedestrians don’t have enough time to cross. All you need to do is stop there where it’s perfectly safe and just have another pedestrian or your traveling pal take as many pictures as possible with the bridge and the lions in the background. Especially at night time when the traffic green lights turn on, cars are moving towards you and their bright headlights create such a dramatic effect for your awesome pictures. 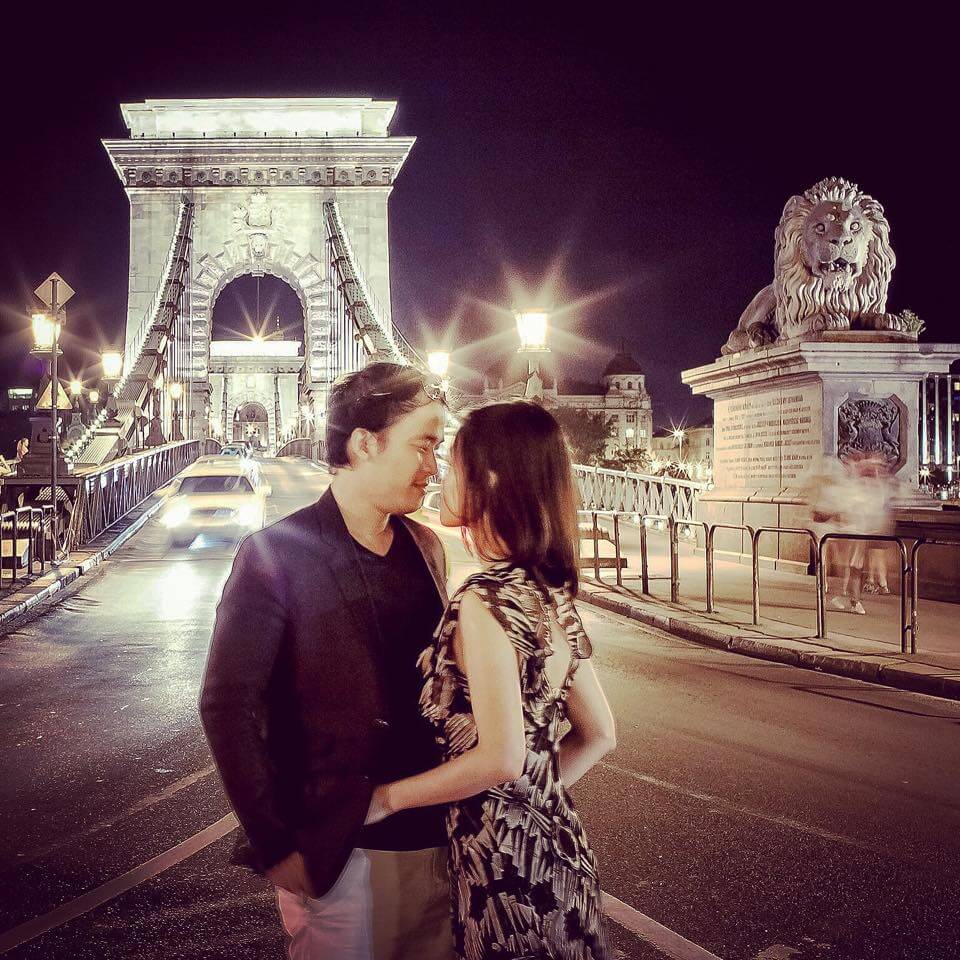 The perks of visiting Fisherman’s Bastion around sunset time are getting the whole place to yourself (very few tourists) and the incredible view with that precious golden light. However, even though you get there around 5-6pm, the place can be still filled with people (significantly less than in the morning), but still not unoccupied enough for your perfect picture. The secret here is that you need to get to the second level where you need to pay a very minimum amount of entry fee (about $7). Most of tourists gather on the first level because it’s free and in most people’s opinion, first level or second level offer the same view. It’s true that there is no difference between the two levels; and why pay to get the same view? The answer is if you want to take pictures with no one around, you gotta pay. So as you see, the $7 entry fee rewarded us with these amazing pictures. 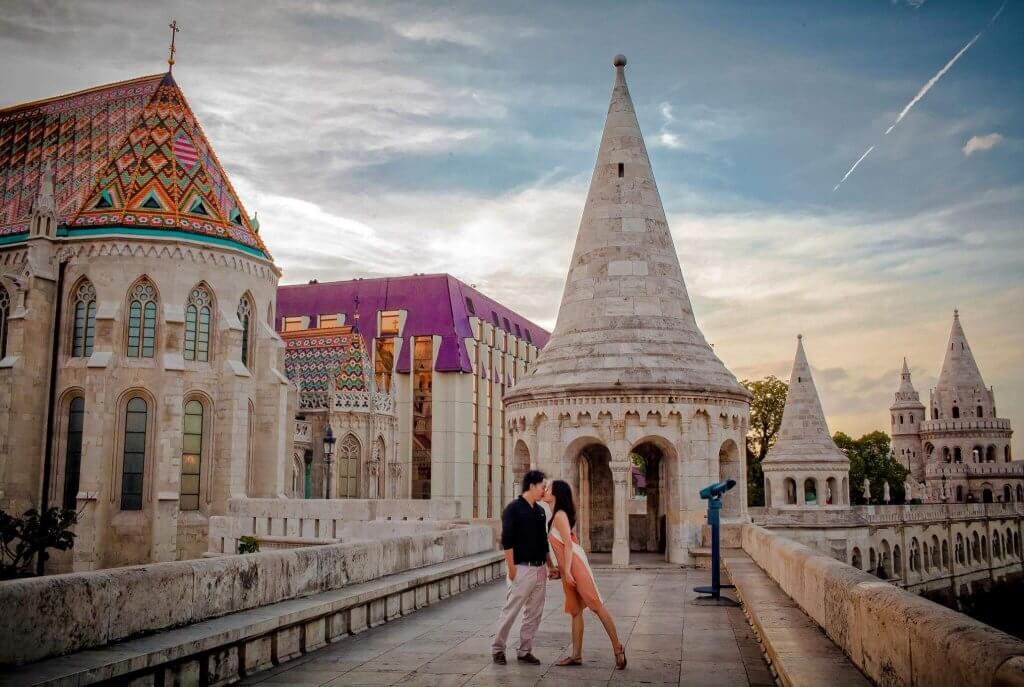 3. Opposite from the Parliament

I don’t remember exactly the spot where we took the following picture, but it should be very easy to find. First, locate the Parliament Building. And then instead of standing in front of it, cross the Chain Bridge to the other side of the Danube River. Walk along the river and find the spot exactly opposite with the Parliament. And again, night time is the best time to take picture. The Pest-side pedestrian zone between the Chain Bridge and the Elizabeth Bridge is called Danube Promenade.The Promenade is lined with arts masterpieces and sculptures that are very interesting and unique to take picture with including the Little Princess sitting on the railing and the statue of the statesman István Széchenyi. I found Little Princess statue sitting on the railings of the Danube promenade. She has been here since 1972 and has become an iconic statue. I sat next to her and she told me her story: “…I was six years old and playing in the garden. I was dressed as a princess with a bathrobe on my shoulders and a paper crown on my head. My father saw me and immediately sculpted that moment. Years later, the capital requested a statue from my father and he immediately thought of “Little Princess”. Since then I was placed in an elegant location on the Danube promenade and become a symbol of Budapest…” 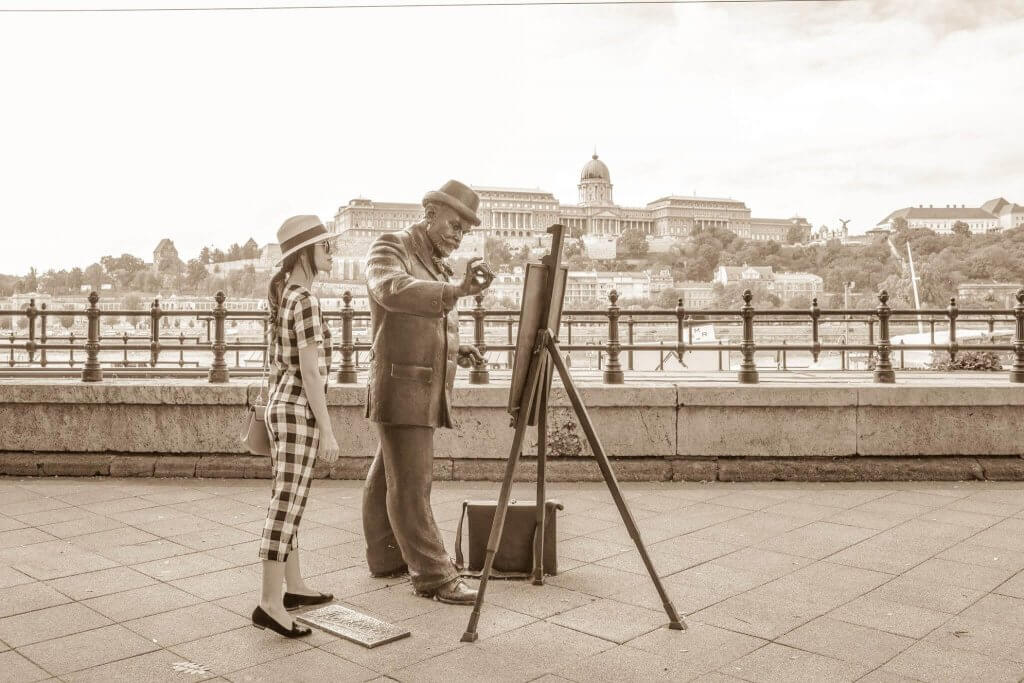 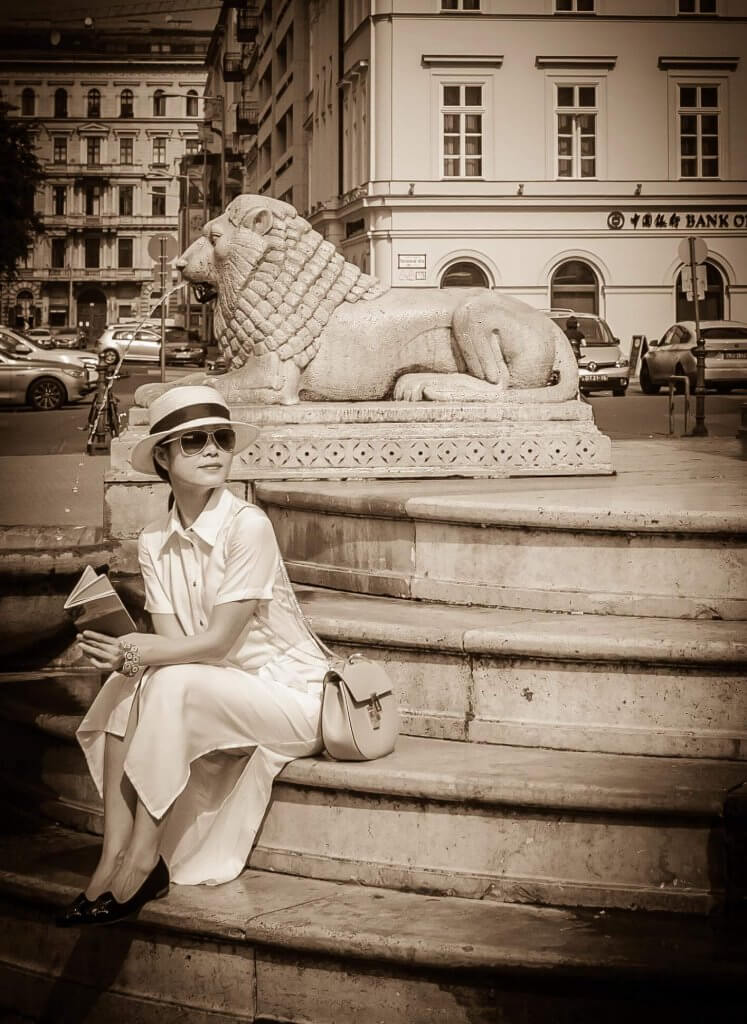 5. View of Budapest and the Danupe from top of Gellert Hill

We walked all the way up to Gellert Hill (20 minutes of sweat and tear to get to the highest point of Budapest). We waited until 7pm when everything was magically lightened and got this shot. The panoramic shot is well worth our effort and patience! Budapest, “a city of baths”, is also known as “a city of cafes”. Coffee culture was thriving in Budapest from around the early 1910’s and cafe served as common meeting places of talented writers, poets, and artists. The world’s most beautiful cafe happens to be in Budapest-the New York Cafe. Everything here is made of bronze, marble, velvet, and silk. You will find yourself have lunch in an elegant extravagant setting of an opera house at the same time snapping some amazing Instagram-worthy pictures. 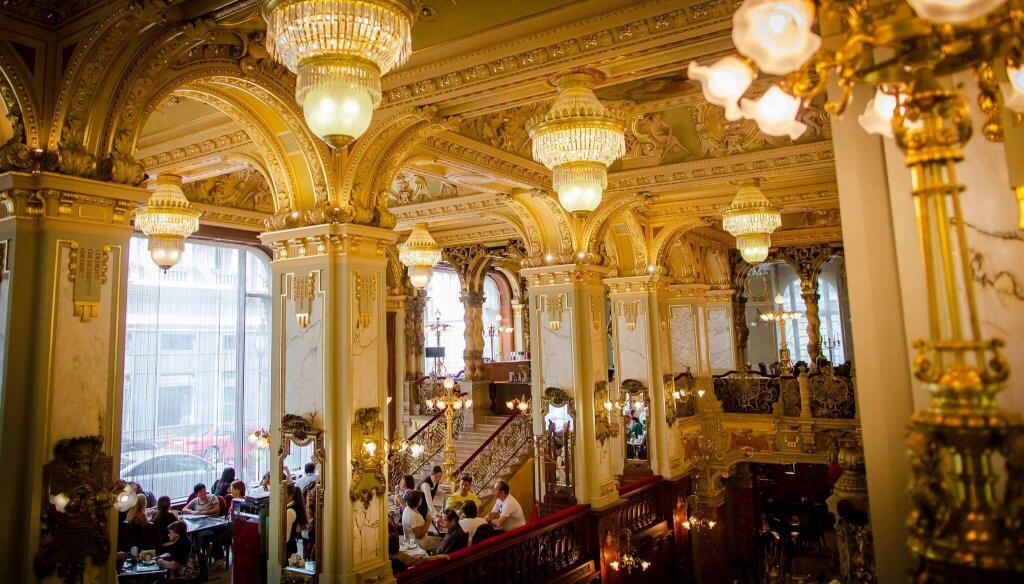 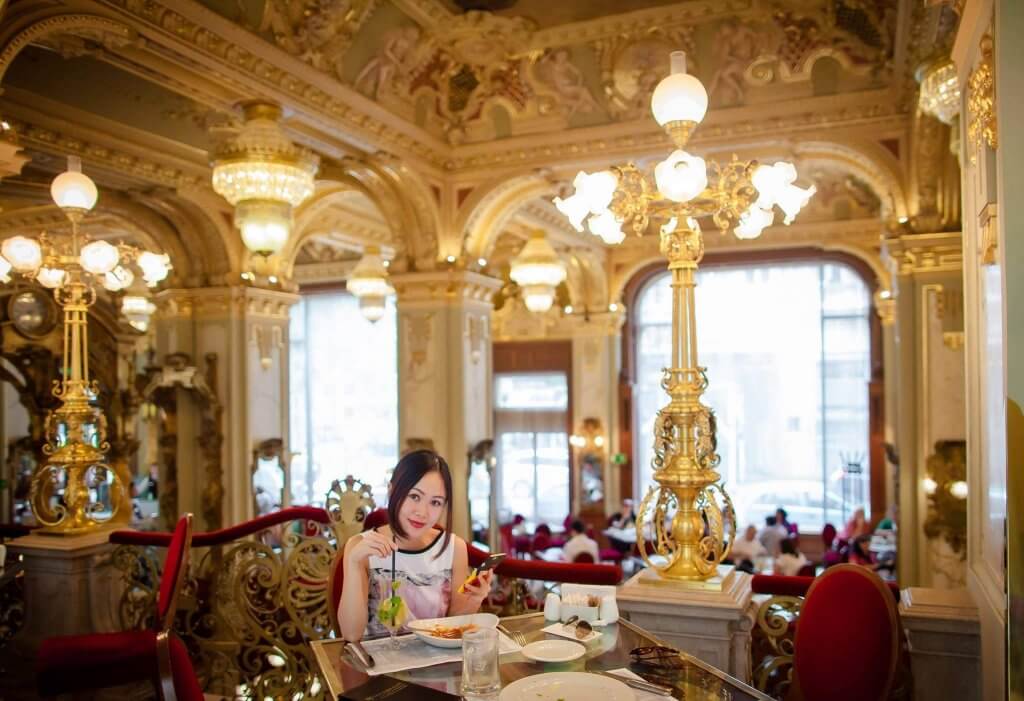 While sipping my coffee at Cafe Gerbeaud, I admired the fine interior and the lavish ambience (Venetian chandelier, golden stucco, marble tiles,..) and for a moment there took a step back into the past. Buda Castle is one of the most amazing architectural masterpieces of the cityscape, and the building easiest to recognize from the Pest side of the Danube. Once you arrive at the castle, head to their garden and have your traveling pal/husband stand on the balcony at the higher level when you run down little steps to the lower ground. And voila….you get yourself one amazing picture with the Chain Bridge and Danube River in the background. Thanks everyone for reading.

Our favorite moments in Budapest 🙂
(HD version sure makes these moments look better :))))


Error: API requests are being delayed. New posts will not be retrieved.

Error: API requests are being delayed for this account. New posts will not be retrieved.