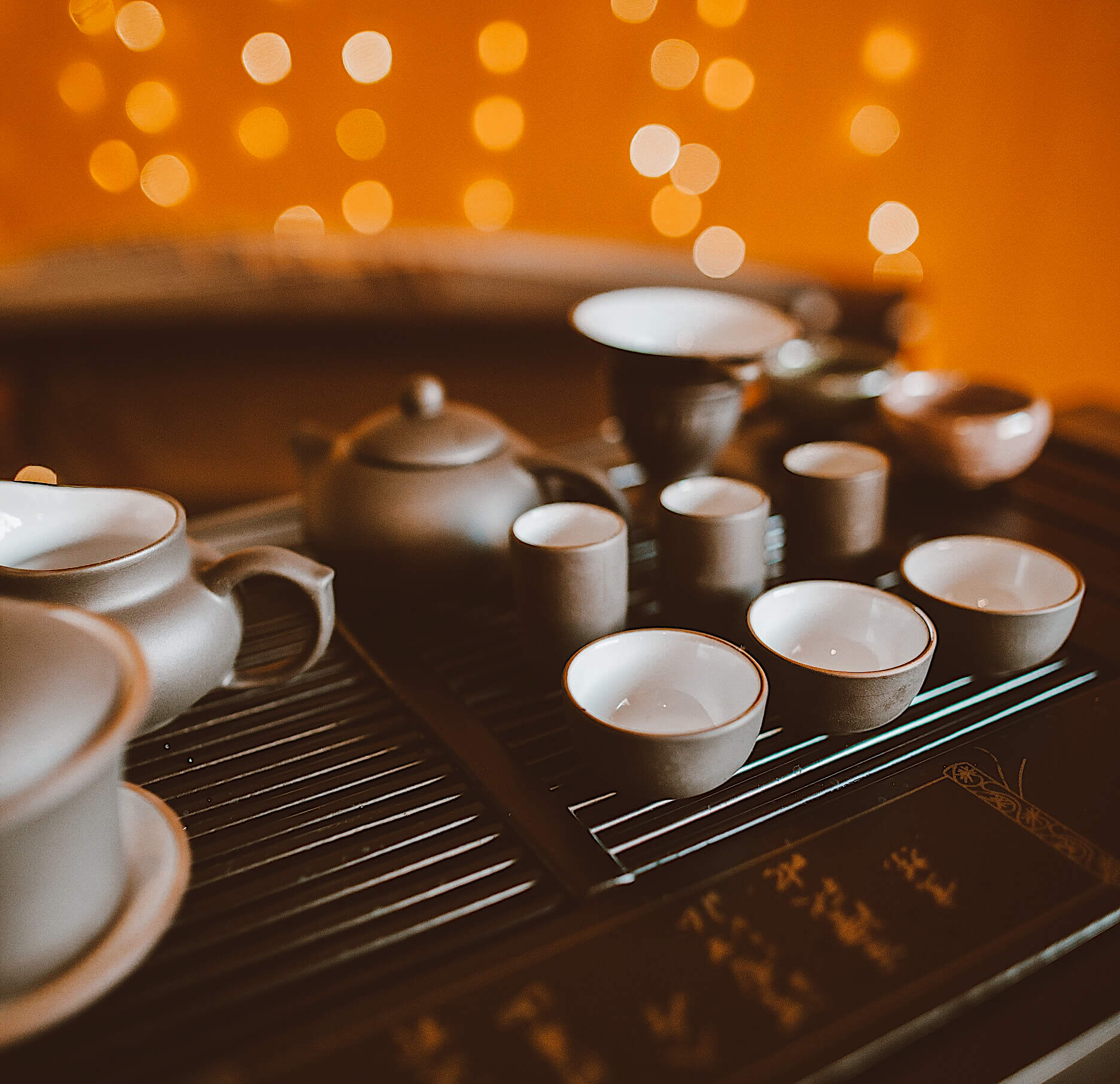 The Ultimate Guide to the Gongfu Tea Ceremony

When it comes to tea, or “cha”, “gong-fu” describes the traditional Chinese way of tea making. The “gong fu” in “gong-fu cha” has the same pronunciation as the “kung fu” in “kung fu fighting”, which literally means “skill”, or “dedication”. Like Kung Fu, Gongfu is an involving art that intertwines the spirit with the mind. The real goal here is to become aware of the cha qi’ (tea energy), to have an experience that is beyond just taste and aroma but an experience inclusive of the mind body and soul.

Brewing tea according to this ancient method is more demanding than simply filling a cup of tea leaves with boiling water. In gong fu the tea there are many precise steps involving both the tea master and tea drinker to sharpen the sense of sight, smell, and taste.

There are a number of elements that are required in order to perform the Gong Fu Cha:

1.  A brewing vessel (either a Yixing pot or a Gaiwan covered cup) – both are clay

Or you can use a Yixing tea pot.

Yixing tea pots are made in the town of Yixing (China) and the clay from the local hills has a special character and quality. Iron oxide gives the pots strength and an ability to maintain a stable temperature during brewing; other minerals allow it to adapt to temperature changes during the brewing process.

4. Tea’ Accessories (Cha Dao): These come in handy when you don’t have to come in contact with the teacups as might be considered unclean. It’s critical to avoid fingers or hands touching the tea leaves and spoiling them with sweat, oils or scent from our skin. These accessories come with a wooden holder that includes the following:

***Teacup tweezers: for lifting the small cups and fragrance cups
***Tea scoop: for measuring teas
***Tea needle has one pointed end to clear leaves from the teapot spout and a blunt spatulated end to scrape leaves from inside the teapot after brewing is completed.

5. A tea pitcher (Cha Hai): If you’re brewing for more than one you’ll need something to pour the brewed tea into before serving between cups – a tea pitcher, usually called a cha hai. This further insures that the tea is the same strength in color and flavor for each guest.

***Also known as the “bowl of impartiality”, a cha hai ensures that every participant gets the same cup of tea.

7. Hot water: Tea kettle for heating the water for washing cups and pot, brewing the tea and to keep the water warm for additional pouring.

What Kind of Water Is Used for Gongfu Cha?

The Gongfu tea brewing method emphasizes on two important elements involved in tea brewing – the type of water used and the temperature of that water. Chinese tea masters consider spring water to be the best for tea brewing as it is clean, full of natural minerals, and rich in oxygen. We can use bottled spring water!

Incense is often first burned before the ceremony to to bring a soothing aura. While the incense is slowly burning, you’ll start to feel more relaxed and calm.

To prepare the tea, the pot, jug, bowls and aroma cups are placed on the tray, and hot water is poured from the kettle over them all to cleanse them and warm them ready to receive the tea.

To begin the ceremony, the tea artist uses a special spoon to pull the tea leaves out of the jar. The leaves are placed on a plate and shown to each guest. The observation of the dry leaves and the enjoyment of the aroma are part of the appreciation of the tea.

A good amount of the tea leaves is needed. Fill the small teapot 1/2 or 2/3. This stage is called ‘black dragon enters the palace.’

Empty the teapot of the warming water, place the measured amount of tea in the teapot and fill with the proper temperature water, allowing the water to overflow the top of the teapot until the bubbles disappear and the water runs clear. Replace the lid and immediately pour off the water!

Water is then poured onto the leaves again from an elevated height from the kettle at the correct temperature in a circular movement to ensure that all the tea is covered with water. The steeping time is different for every tea. Because gongfu sessions have a high leaf-to-water ratio, the steeping time is usually just a few seconds.

When the tea is ready, drain it into the fairness pitcher. Such pitchers are useful to make sure every cup you serve will taste the same. Empty the teacups of the warming water (using the tongs of course so as not to touch them) and serve the tea.

While the guests enjoy their first bowl of tea, the tea master brews a second pot of tea and repeats the procedure as many times as the tea continues to give flavour. The precious half hour or so that is spent enjoying a Gongfu tea ceremony creates a peaceful calm space in our busy lives.

Remove the leaves and rinse your teapot and lid with hot water and place in the open air with the lid off to allow them to dry. Tea is best made with a dry pot and this also allows the oils to set in the clay. Rinse the rest of your tools and allow to air dry.

The most important step is that both you and your guests enjoy the gong fu service presentation and sharing a cup of tea together.  This is both a relaxing and entertaining way to enjoy a new tea or an old favorite, taking the time to fully flavor and aroma, along with a centuries old tea  ceremony.